Khanh Hoa Provincial People’s Committee has just approved the AMI Khanh Hoa Energy Joint Stock Company to invest in the project of a solar power plant with a design capacity of 50MWp in Vinh Dong and Vinh Nam hamlets – Cam An Nam commune – Cam district Lam. Along with 8 other large-scale solar power plant projects, 16 solar power roof projects (TMN) combined with agricultural production and 68 households installing solar roofs are being implemented in the locality. Phuong …, Khanh Hoa is one of the hot spots of renewable energy projects in the Central region.

The reason for a series of solar power plants to be formed and concentrated in Cam Ranh and Cam Lam is because Cam Ranh has an average solar radiation of 5.34kWh / m2 / day, radiation level. Although in Cam Lam area, it is lower but still high compared to other provinces in the province. Solar radiation is the first factor to be taken into account when considering the construction of solar power plant projects. Besides, the convenient connection to the national grid system is also a factor attracting investors to decide to deploy projects in Khanh Hoa.

A model that is highly effective in exploiting land funds is combining power production with agricultural production (cultivating crops below solar photovoltaic panels). In Khanh Hoa, this is one of the new ways of being developed and interested by local companies in remote areas of the province such as the communes of Khanh Vinh mountainous district; Ninh Xuan and Ninh Xi communes of Ninh Hoa town. It is expected that by June 30, 2019, 16 solar power projects in conjunction with agricultural crops will simultaneously connect to medium voltage electrical network of Khanh Hoa PC.

According to statistics from Khanh Hoa PC Sales Department, as of March 31, 2019, there were 68 investors investing in installing solar power on the roof to sign a contract to install 2-way electricity meters and register to sell electricity to The company from the roof solar power of the family with a total capacity of 328kWp, the reverse power output to the grid is 68,483 kWh. This shows that people in Khanh Hoa have “caught up” with the trend of using electricity economically in combination with business from renewable energy sources exploited at households.

On the unit side, PC Khanh Hoa also actively worked with a number of solar electricity service providers to deploy solar electricity installation in the buildings managed by the unit: the Company for houses provide roof rental services to implement the project and buy back the electricity produced from the roofs of the Company.

In order to create conditions for customers using electricity in the whole province to have more access to information on regimes, policies and utilities when using solar electricity, Khanh Hoa PC has strengthened its work. advertising and propaganda on mass media combined handing out leaflets at the transaction points of the Company. 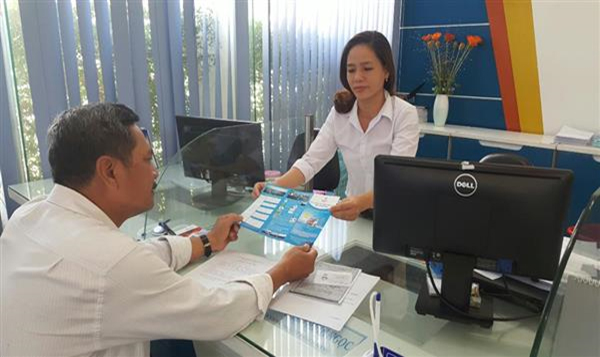 Accordingly, 5000 leaflets propagating the effectiveness of solar power installation on the roof were sent to electricity users in Khanh Hoa province. At the Company Sales Department, employees are assigned to consult the policies and policies related to solar power for customers through telephone, email, customer care facebook page.

On the other hand, Khanh Hoa PC has collaborated with the provincial Labor Union to propagate the utility of solar power extensively to employees and employees working at businesses as well as administrative and professional agencies. . This is considered one of the communication channels to help convey information very effectively to each employee.

In addition, a series of news articles and reports on policies to support customers to deploy solar power on newspaper pages (electronic, paper), local television stations, central television channels … has brought great communication effect on the electricity industry’s policy to the policy of investing and exploiting solar power.

With the goal of generating electricity before June 30, 2019, solar power projects in Khanh Hoa are speeding up the progress of construction and installation of power generation equipment, transformer systems, transmission lines and connection Recently, on April 25, 2019, the General Director of EVNCPC has surveyed the solar power plant in Central Vietnam in Khanh Hoa to urge relevant units to rush to complete. all work contents to be able to generate electricity on time as prescribed.