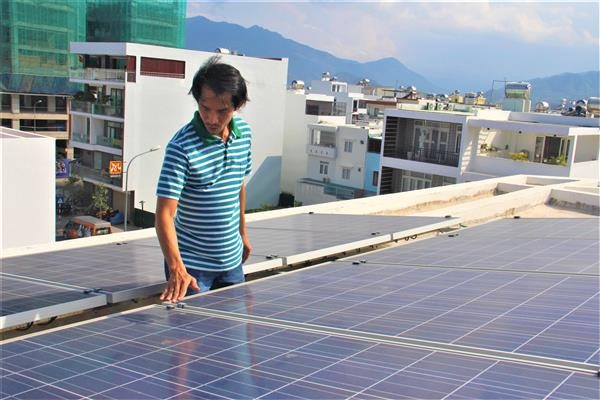 Mr. Luong Bao Toan (Lot 92, A4 Street, Phuoc Hai Urban Area, Nha Trang City) said that two years ago, his family installed 8 solar panels with a total area of ​​16m² at a cost of 70 million. copper; These panels provide families with 300kWh of electricity / month, saving electricity from 700,000 to 1 million / month. With investment for this system, about 6 years, his family will recover capital while the device is warranted for 12 years and life cycle of up to 25 years. “Currently, the installation price has been greatly reduced, along with the battery area that my family has installed, now only about 50 million VND. Therefore, in the near future, I will install more to sell electricity, consider this as an investment form and prevent the family’s capacity to increase electricity use, ”Toan said. 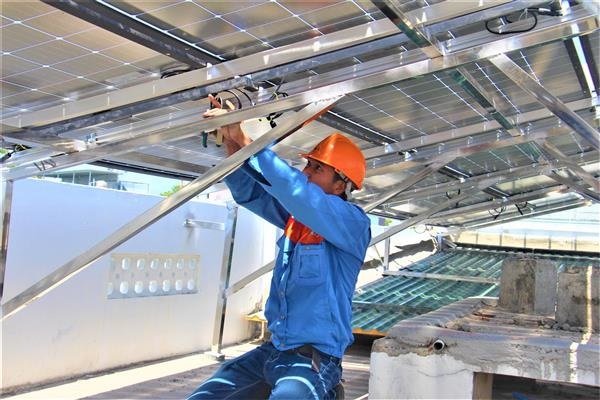 Mr. Bui Huy Hieu – Director of Nha Trang Branch Bach Khoa Solar Investment and Development Joint Stock Company (Solar BK) said: “Since the electricity price has increased, especially when PC Khanh Hoa officially buying electricity, the number of customers installing solar power systems skyrocketed. Particularly at Solar BK, Nha Trang branch has increased by more than 30%. In the coming time, the number of customers is forecast to increase much. According to Mr. Hieu, in addition to households, there are now many manufacturing enterprises that have used factory roof systems to install roof solar power to reduce energy costs. Solar BK Nha Trang Branch is completing a number of attic solar power projects in industrial clusters: Dien Phu and Dac Loc, which are expected to be completed and integrated into the grid in May 2019.

Within 5 years, if the power output is not enough to return the initial investment, the customer will be refunded the investment by the insurer. Within 25 years, the solar cell supplier is also committed to ensuring that the battery’s electricity production efficiency reaches at least 80%. In addition, the company also cooperates with the Bank for Investment and Development of Vietnam to support customers to install solar power loans from 12 to 36 months with a loan approval rate of up to 70%. 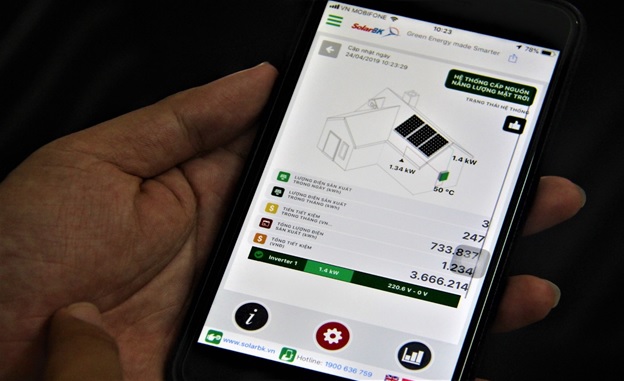 Track information using solar electricity by App on the phone

Mr. Nguyen Cao Ky – General Director of Khanh Hoa PC said: “Electricity industry encourages people to install solar power on the roof and create conditions for people to sell electricity. We have implemented procedures to connect, install bidirectional meters and buy electricity from solar power projects of households connected to the low voltage grid according to the one-stop mechanism. The electricity units must advise investors to choose the installation of photovoltaic panels, AC power converters to ensure investment efficiency.